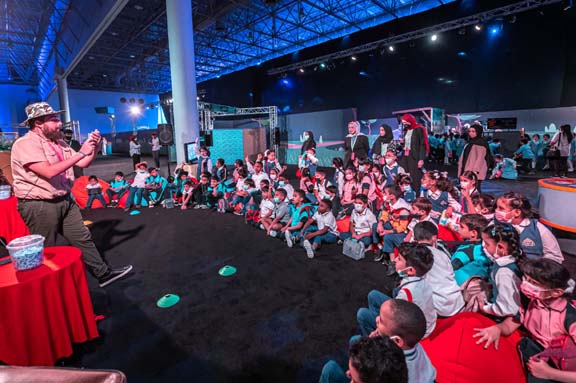 The Robot Zoo is an exciting and novel concept that has unveiled at the 12-day Sharjah Children’s Reading Festival(SCRF 2022) which opened on May 11 in Expo Centre Sharjah.Amidst the eight robotic animals that explain to kids the wonderful engineering that exists in nature is Mr I’s Animal Games Show run by Anthony Estephan.

A motivational speaker and trainer, Estephan is making the scene livelier at the robotic animal habitat, complete with animal sounds and a darkened environment, with his guitar and musicwhen he is not entertaining attendees with games and hands-onactivities.

For toddlers, he has simple jigsaw puzzles while older kids can join in team sports and animal quiz. For the latter he divides the children into land animal and sea animal teams, and lets them play a game or two to make the idea sink in. For instance, to understand the depth of the ocean, they are asked to dip a pen tied around their waist into a bottle while they ping-pong a cushionin order to answer a question on the sleep time of fish.

“This is an adventure trip where they can seek knowledge and fun at the same time.I sing strumming the guitar at the end of each game, and that way I am giving them edutainment,”Estephan said while trying to settle a pair of toddler twins with cushions to understand the sleep time of fish.

The programmes are tailored for children aged 6-15, and are available during the daily duration of the SCRF, which carries the slogan ‘Create Creativity’ this year.