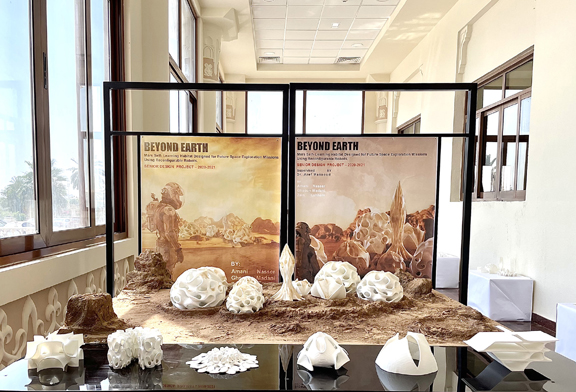 In the presence of His Excellency Prof. Hamid M.K. Al Naimiy, Chancellor of the University of Sharjah, a group of female students from the Department of Architecture at the College of Engineering presented a design and model for their graduation project entitled: “Beyond Earth”. It is a design of a three-dimensional habitat on Mars.

During the meeting, the Chancellor of the University expressed his pride in this achievement by the students and thanked them as well as the College of Engineering and the project supervisor and announced that the Mohammed bin Rashid Space Center expressed interest in the project and the possibility of cooperating with the students and supporting their project.

The idea of the project consisted of the students’ interaction with the future vision of the United Arab Emirates towards space exploration and conquest, by sending the first Arab and Islamic probe to Mars – the Mars Hope Probe. It is one of nine countries around the world aspiring to explore this planet, so this project would be one of the first around the world that worked on designing a final home for astronauts and scientists who are expected to stay on Mars to study its surface and the possibility of habitation and life on it.

During the meeting, students Zain Lahham, Amani Nasser, and GhosounMadani presented many of the research they carried out in cooperation with several university colleges with the aim of linking the different fields of architecture and astrophysics. They prepared extensive research on the extreme environmental conditions of Mars, material availability, and site selection. As a result of this research, an adaptive, self-learning system for building using reconfigurable robotic robots was designed as a future building tool that supports data analysis to solve problems related to construction and environmental conditions on Mars.

The studies also showed the importance of digital future design and implementation, and support for the use of artificial computational intelligence in architecture and planning. As well as the use of the same techniques in the post-design stage: the experience of manufacturing and digital implementation using sustainable materials from Mars soil and its implementation through the technology of 3D printers .

It is worth noting that the students presented the project with the latest technologies through digitally processed images and videos supported by virtual reality techniques to appear as real as they are on Mars. Models of work experiments printed with 3D printing technology were also shown, in addition to a stereoscopic (with dimensions 1.5 * 1.5). meters), emphasizing that they use the latest technologies that the University of Sharjah provides to its students and teaching staff in all its research facilities.