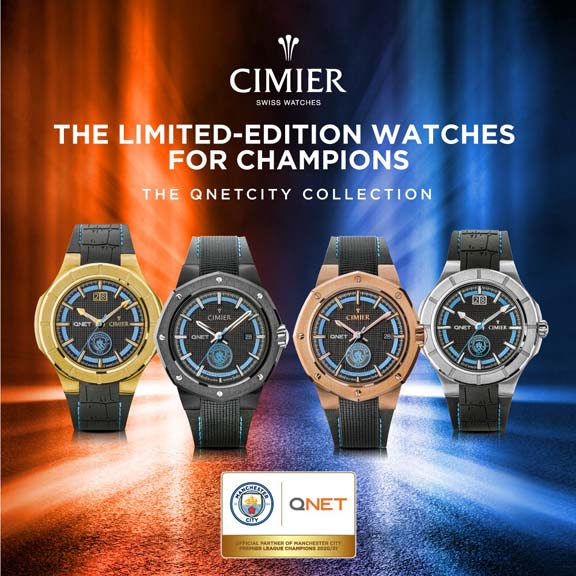 Dubai – June 7, 2021- Celebrating English Premier League 2020-21 Champions, QNET the official direct selling partner of Manchester City Football Club, invited its distributors and partners to witness their crowing in a memorious last season game viewing ceremony on Sunday May 23rd in Dubai. This was the opportunity for the E-commerce based direct selling company QNET, to launch the third collection, and tenth timepiece, in the QNETCity Collection of Swiss Watches, result of joined forces with Manchester City Football Club. QNET, a sponsor of the Premier League Club since 2014, has previously launched two limited edition watch collections under the historic Swiss brand Cimier in 2016 and 2018. The launch of the tenth timepiece is testament to QNET’s long-standing relationship with the Manchester City Football Club.

Bold and modern, the statement pieces inthe third instalment ofthe CIMIER-QNETCity collection of premium Swisswatches are designed with the Club’s iconic obsidian blue emblem on the dialand have the words “Official Licensed Product Manchester City FC” engraved on the case back. The Automatic Swiss Movement watches in the collection are limited to 1894 pieces as a homage to the year the Manchester City Football Club was established and are available in Black and Rose Gold. The Quartz variant timepieces are available in Stainless Steel and Gold. Commenting on the design aspects of the collection, JR Mayer, Director of Sales and Marketing for SwissWatchmaker Cimier said, “The collection features a fusion of sporty and elegance, inspired by the game of football and its inherent geometry. The octagonal bezel blends well with the dial’s strong and dynamic character. We added fine detailing in the integrated crown and personalised buckle featuring a deployment system that secures the watch. We felt that the subtle integration of the Manchester City Football Club’s signature blue on the dial and in the stitches of the rubber strap gives it a bold and unique design.”

In line with QNET’s commitment to sustainability and reducing our carbon footprint as well as Manchester City’s commitment to creating awareness about climate change, the packaging for the Cimier-QNETCity Watch Collection is made using environmentally-friendly materials. From her side, Malou T. Caluza the CEO of QNET stated, “We’re always keen to provide our customers with a wide range of health, wellness and lifestyle products that enable people to lead better lives”. She added, “This new collection of watches designed by elite European artisans and produced by master craftsmen in Switzerland at one of the oldest watchmaking ateliers is a tribute to the love of the game and the partnership between QNET and Manchester City.”

In Middle East, the partnership with Manchester City has already paid off. In 2018, as part of QNET’s 20th year anniversary and in recognition of the Year of Zayed, the company sent 20 children of different nationalities, including UAE, to the City Football Language School at the Etihad campus in Manchester, UK. A very successful experience which was repeated in 2019 by selecting other children from the region, especially Egypt.

The same year, 2018, QNET hosts event in Cairo for Manchester City Centurions Trophy Tour presented by Eithad Airways. A unique occasion for fans and company’s distributors in Egypt to bask in the glory of the Premier league trophy and Carabao Cup.

It must be said that success has no limit. The following year ManCity FC won 6 trophies in one season. Premier league trophy, Carabao cup, Continental cup (Woman premier league trophy), FA Cup men and women and Community Shield. QNET had the privilege of receiving the prestigious titles in its premises, this time here in UAE.

QNET and Man City: A Partnership Built to Win

In 2014, QNET entered a historic partnership with Manchester City as its official Direct Selling Partner. In 2018, QNET became the first sleeve partner of the Manchester City Women’s Football Club for the Women’s Super League 1. Last year, QNET and Man Cityjointly announced the extension of the partnership for another five years.

“Manchester City’s journey to becoming the best football clubs in the English Premier League has been one of commitment, focus and teamwork – traits that we endorse and valueat QNET. Through this partnership, we aim to link the excitement of football and the passion for the game to the thrill of direct selling and the drive of our distributors,” added Caluza.

“We believe this unisex watchcollection is a perfect match for the fan in love with the game, on and off the field. The new collection provides another strategic platform for QNET to further elevate our brand and achieve greater reach to our Independent Representatives (IRs) and consumers worldwide,” concluded Caluza.